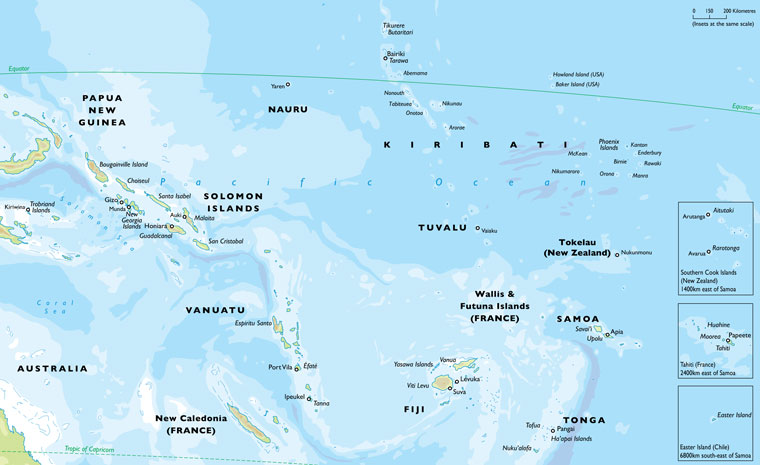 Boy in Tarawa, Kiribati, central PacificFrom the moment I woke up on the plane 1,500 kilometres north of Fiji and pulled up my window blind against the dazzling sun, everything about Kiribati promised to surpass my wildest expectations. I had wanted to go to the diminutive island state ever since I had been to Ghizo Island in the Solomons. There, in a squalid refugee village, I had come across the most beautiful-looking people I had seen in my two voyages across the Pacific. When I enquired where they were from, one of them explained that they were Micronesians from the Republic of Kiribati who had been resettled abroad because of overcrowding. Like most people, I’d never heard of it, but when I discovered it was one of the Pacific’s most isolated, unknown group of atolls, it only made me want to go there all the more.

Approching Tikurere atoll on the outrigger, KiribatiNow a long, boomerang-shaped atoll floated below the plane on the shimmering water. On one side was a magnificent turquoise lagoon and on the other was the deep blue ocean. Soon we landed at Tarawa, Kiribati’s main island, where children were crowded behind a barrier awaiting the arrival of the weekly plane. A minibus took me thirty kilometres down to Bairiki, the administrative centre on southern Tarawa, where I wanted to stay.

The island comprised of interconnecting atolls, which were so narrow that at times I could almost touch the water on both sides. At first sight, everywhere seemed to be a heady combination of attractive fales, superb white beaches and belts of coconut trees.

The next day, to my dismay, I found out that Tarawa was far from being what it seemed.

Girl on Butaritari Island, KiribatiRabid-looking dogs copulated on the never-ending beaches, which were strewn with plastic bottles, tin cans, excrement and mounds of decomposing clothes.Burnt-out shells of cars and disused machinery lay abandoned by the roadside.Packed minibuses drove by, with pounding rap music blaring from their stereos. Youths wearing Bronx-style baseball caps and calf-length baggy shorts hung out the windows, chewing gum. Many of the seemingly pretty fales, which ran the entire length of the isthmus, were shacks held together by ragged palm-leaf blinds or dirty sacking. In-between, separated by tangled wire fences, were corrugated-iron sheds or half-completed bungalows made of breezeblocks. Tarawa, I quickly learned, is one of the most overcrowded places on earth, with 42,000 inhabitants crammed into only thirty-one square kilometres. . .