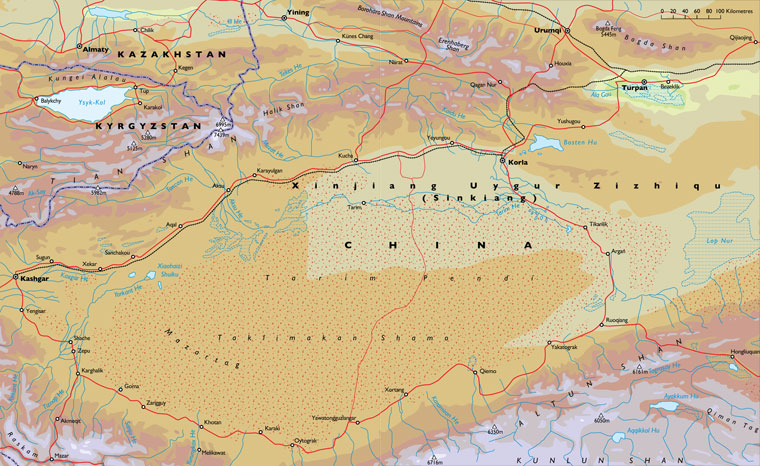 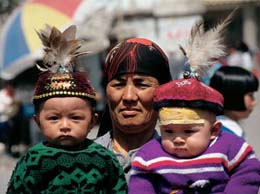 The potholed road to Yining, capital of Ili Kazakh Autonomous Prefecture, 700 kilometres west of Urumqi on the old northern Silk Road, is flat at first, with interminable plains lined by poplars and drab Chinese villages.

I was glad, therefore, to have colourful company for the two-day bus journey, including Uyghur women wearing colourful headscarves under sequinned Muslim caps; two smartly dressed Russians from Alma Ata in Russian Kazakhstan who had trilby hats, smart suits and gold teeth; and a Uyghur boy who kept breaking into anguished song, like a lovesick cat. 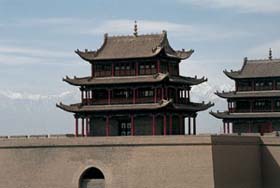 Jiayuguan Fort on the edge of the Taklimakan DesertIt was also good-tempered. Once, the bus rocked with laughter when we skidded to a halt and an unfortunate man with diarrhoea shot out like a rabbit and dropped his trousers in full view of the bus. By now we were in increasingly arid semi-desert, but it wasn’t until afternoon, with grasslands now rolling away south, that I saw my first Kazakh, a solitary, motionless horseman watching his goats and camels, and the white dot of a yurt, lost in the emptiness.

It was dark when the bus rolled into the compound of a desolate village. Everyone slept in an empty, freezing dormitory, with stained mattresses, rickety iron bunks and a solitary light bulb. I couldn’t wait for daybreak, which revealed the bus running parallel to the newly completed Urumqi–Alma Ata railway line across a high, lifeless plateau at the foot of the giant snowcapped Borohoro Shan Mountains. 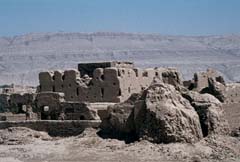 Ruins of an ancient Silk Road city, KuchaWe climbed laboriously for hours until below was frozen Lake Sayram Nur, almost on the border with Bortala Mongolian Prefecture. Here I intended to do some walking in the grassy foothills where Kazakhs bring their flocks in summer and hold their Naadam Festival (horseracing, wrestling and riding competitions). 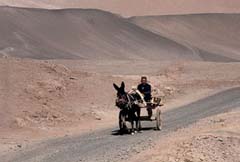 Man in a pony cart,
the Flaming MountainsI jumped up out of my seat. A minute later, past a crumbling building on the deserted shore, I was standing alone in the biting wind as the bus full of astonished faces roared off. On a corroded sign were written the Chinese characters for hotel. Investigation showed the building to be deserted, and the doors of empty dormitories banged as the wind whistled through cracked windows. A sign at the end of an echoing corridor indicated a restaurant, but inside, abandoned tables and chairs were strewn over the floor. . .