Ecuador: the Valley of Volcanoes 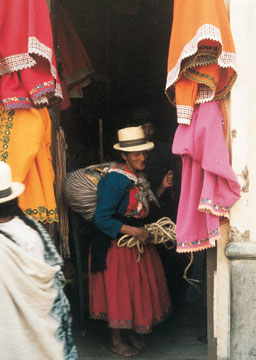 Shop in Quito, Ecuador
As our bus pulled into Aqua Verde, a bustling town on Peru’s border with Ecuador, the main street was awash with attaché cases, cowboy hats and low-slung holsters. Half the population seemed to be money-changers, the other half military. I and other passengers to Ecuador were corralled into Immigration, where a mean-looking lieutenant with a John Wayne moustache sat, his legs splayed nonchalantly over his desk.

‘One day in Ecuador for every ten dollars,’ he began aggressively in Spanish.
‘Right,’ I replied. I knew T-3 tourist cards were for either thirty or ninety days.
‘How much you got?’
‘Nine hundred.’
‘ ’Kay, that’s thirty days.’ 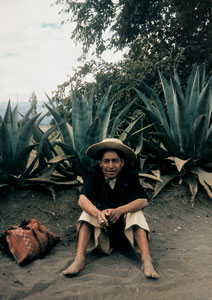 Ignatius Cavelli, Salasaca, Ecuador‘Hey, that’s not right!’
‘You got anything for me?’
‘What?’
‘All right, get out!’

At least, geographically, Ecuador was how all countries should be when first visited – immediately different. Behind mouldy corrugated rooftops, tropical forests climbed foothills of mist-enshrouded mountains. The packed bus pulled out along a potholed road lined with banana trees and thatched houses on stilts, where children, cooling themselves in the oppressive midday heat, splashed in puddles.

Eventually the road started to ascend, leaving the sweltering coast behind. By nightfall we’d reached a high pass and the bus clung to the mountainside as its headlights searched for bends and yawning chasms. Trapped in the back seat, I was increasingly uneasy until finally, after the bus teetered over yet another precipice, I couldn’t bear it any longer. At the next village I struggled out the rear window of the bus. It roared off into drizzle, leaving me alone on an empty gloomy street.

Footsteps ringing on deserted cobbles, I found a pensión where, in a deserted dining
room with an abandoned jukebox, a woman was examining her son’s head for fleas. I sat
down and within minutes she plonked an unsolicited plate of rice in front of me.

‘That’s all we got,’ she said, as a cockroach fell off the ceiling and landed on the floor
with a clunk. ‘Your room’s above.’ . . .