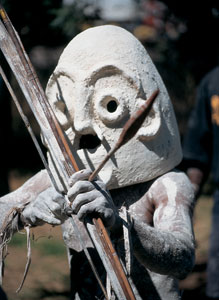 Annual traditional festival, Port Moresby‘I know why you’re going to the “Islands of Love!”’ joked the young air-stewardess, sitting down next to me and grinning mischievously. Outside, the mountains of Papua New Guinea receded and the half-empty plane droned across seemingly boundless blue ocean. 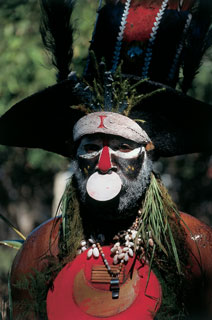 Traditional festival, Port Moresby‘No you don’t,’ I answered, blushing. In fact, I wanted to learn about the Trobriands, the exotic coral islands 250 kilometres east of Papua New Guinea, which were made world-famous by Polish anthropologist Bronislaw Malinowski in his classic books The Sexual Life of Savages in North-Western Melanesia (1929) and Coral Gardens and their Magic (1935). Despite both being serious studies of the islands’ inimitable yam culture and mysterious Kula circle (a ritual trading ring), his astonishingly explicit analysis of the islands’ sexual mores – especially those of the sensuous girls with their free and easy manners and short grass skirts – caused a sensation and led to the mistaken perception that the islands were a sexual paradise.

Two hours later we banked steeply over the fifty-kilometre-long main island of Kiriwina, the flat, bush-covered interior of which ended in beaches ringed by coconut trees. Once we had landed on a short grassy airstrip, we taxied to a hut where eager faces crowded behind a fence watching the week’s highlight: the arrival of our Saturday flight from Port Moresby.

An elfin-looking Australian, Zak, who had a long black beard and shining eyes, was waiting with his wife, Katie, and two young children for the mail. While they gave me a lift in their pick-up into Losuia, the main village, Zak explained that they’d been on the island where they were practically the only foreigners, for six months of a two-year Australian re-forestry programme. . . 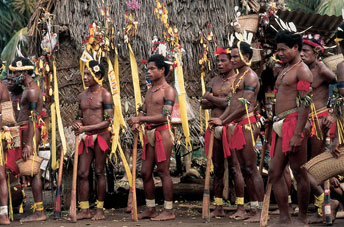