‘The Solomons? They’re some experience, I can tell you,’ Bill, the good-looking, blond Australian, pronounced cryptically.‘By the way, that’s your ship, the Iuminao, down there.Good luck; you’ll need it!’ 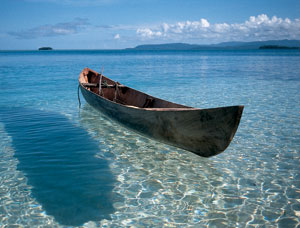 Canoe at Saeraghi Bay, Ghizo Island, the SolomonsIt was Sunday and, after I’d arrived at dawn at the deserted, minuscule Henderson Airport, he’d given me a lift in his pick-up to Honiara, the capital, where I was rushing to catch the boat for the two-day journey to Ghizo Island, 100 kilometres west. Soon we reached a dusty town overlooking a bay where some tramp freighters lay at anchor.

Unsure what he meant, I walked down earthen lanes off the empty main street, and there, besieged by crowds in a dock, was the filthiest rust bucket I’d ever seen.

For a while I sat watching aghast as the Iuminao settled lower and lower in the water until her hold’s entrance had almost sunk below the jetty.Nonetheless, my mind was made up to board, especially when the harassed but obliging Wings Shipping manager, who I’d phoned from Fiji, confirmed at the chaotic pier gates that he’d got me the only cabin. 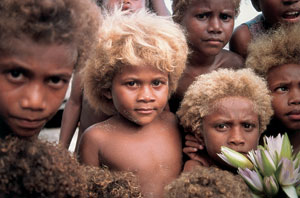 Boys at Auki village, Malaita Island, the SolomonsPushing aside mental images of overcrowded boats that periodically capsize in the west Pacific, I battled aboard to the purser’s office, where Whitney, the sweating, overweight purser, was engulfed by a clamouring, ticketless mob. Finally, giving up ordering them ashore, he seized a megaphone and, as if announcing a Club Med cruise bellowed, ‘Halo, welcum, welcum!’ in Pijin, the English-based lingua franca which supplements the country’s sixty-three languages. He led me across a deck already littered with bodies and boxes to a padlocked cabin under the bridge.

With cobweb-covered windows overlooking the prow, it was bare except for two moth-eaten

Laulasi coral islet in the Langa Langa Lagoon, Malaita Islandmattresses on wooden bases full of ants’ nests. Cockroaches scuttled over rotting floorboards into the stinking, overflowing lavatory. But at least it was my own space and, with the archaic air-conditioning making the suffocating humidity tolerable, it was better than below decks, where passengers were crammed like battery hens next to the juddering engines.

Three hours later, under lowering skies, we made our way along the coast of mountainous Guadalcanal, its misty summits covered with bottle-green jungle, and out into Iron Bottom Sound. The name derives from the sixty-four Allied and Japanese warships, which included battleships, cruisers and submarines, sunk here in some of the Second World War’s fiercest fighting; twice I saw the blackened hulls of Japanese transports beached offshore. . .