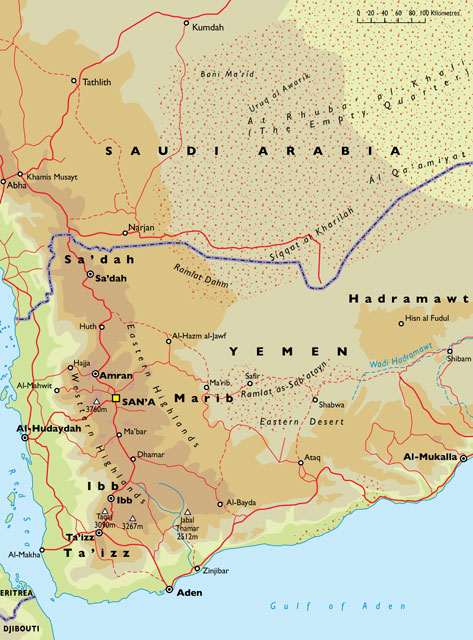 Facades of houses in San’a, the capital of the YemenYemen : the empty quarter

I met Fiona, the hardiest female traveller I’ve ever encountered, on Hotel Golden Daar’s roof garden overlooking San’a, Yemen’s medieval capital, where she’d been studying architecture for months. Dressed all in black, like a Yemeni woman minus the chador, and with long dark hair framing her tanned face, she was a forty-year-old grandmother from Islington. By an uncanny coincidence – she was the only foreigner I came across – she too wanted to follow the Incense Route across the southern Empty Quarter, the great Arabian Desert explored by Thesiger in the 1930s, to the legendary city of Shibam in Wadi Hadramawt.

Hill-top fortress in northern YemenWithout her, I don’t know how I would have done it. As expected, everyone had said it was crazy going to the Yemen immediately after the civil war and the Saudi border dispute, and the Foreign Office had warned of troops massing on the northern border, mined areas in the south, and four-wheel drives being attacked everywhere. Fiona wasn’t bothered.

‘Let’s just go to Ma’rib,’ she said casually. Ma’rib was the ‘Wild East’ town, notorious for heavily armed rebel tribesmen, on the desert’s edge. ‘I’ve a contact there called Mohammed who I bet can arrange transport.’

Two days later, after leaving details of our passports, route and next-of-kin at the fortified British Embassy in San’a, who had said ‘go at your own risk’, our collective taxi descended from a 2,500-metre-high plateau through a winding pass in austere mountains to arid, baking desert known as Ramlat as Sab’atayn at the Empty Quarter’s southern extremity. 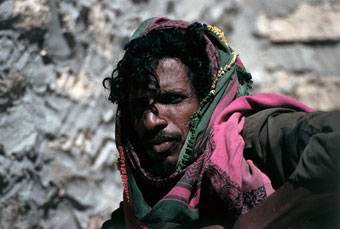 Tribesman in Ma’rib, northern YemenFor hours the road ran straight towards the empty, billiard-flat horizon, where an occasional camel or lorry shimmered like a mirage. I was hanging out of the window, blasted by hot air and wondering how people could exist in such a furnace, when I saw a clutter of buildings: Ma’rib.

First mentioned in an Old Testament description of Queen Bilqus’ visit to King Solomon, it had been the kingdom of Saba’a’s capital in 700 bc, when the great dam was built and sustained a population of 50,000 through irrigation until, surviving several breaches and a siege by Roman general Aelius Gallus in 24 bc, it burst catastrophically in ad 570. The inhabitants fled, as the incense trade had long vanished, and Ma’rib was forgotten until oil was found in 1980. . .