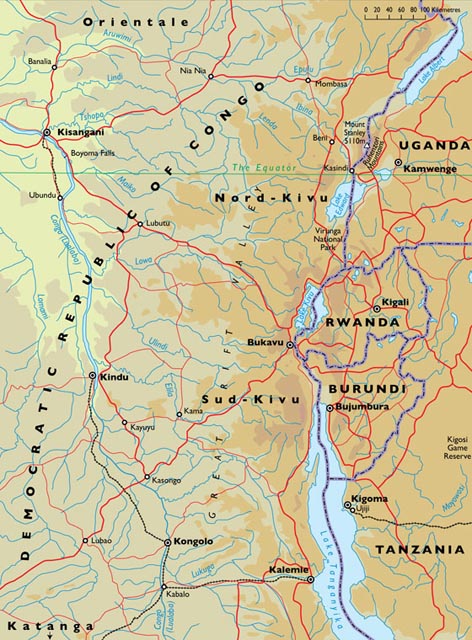 Even before recent tragic events, when the eastern part of the country became a battleground between warring Hutu and Tutsi tribes spilling over from Rwanda, Zaïre, now the Democratic Republic of the Congo, was nightmarish. 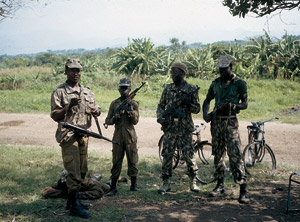 The drunken soldiers, Uganda–Zaïre border, Central AfricaI hadn’t paid much attention – although I should have – to stricken lorries which had been overturned by yawning craters in the dusty red track; I was still shaking from the shock of the khaki-clad soldiers brandishing Kalashnikovs, who had exploded out of mud huts in the deserted no-man’s-land between Uganda and Zaïre. They had drunkenly yelled about passports and the ‘rezzolution’, so I had apologized, and hurried on towards the frontier’s rusty roofs.Now, minutes later, I was in Zaïre talking to truck drivers transporting coffee from Kisangani to Mombasa. They had been waiting two weeks for documents and for armed guards to escort them through Uganda. ‘Not healthy place here, bwana,’ one volunteered. ‘Last week patrol cross at night, shoot peoples. Better move on.’ 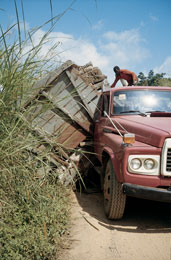 The driver surveying the over-
turned hold of the cattle truckI was delighted to oblige. My journey had originated in Rwanda and Burundi, countries with terrible histories of tribal genocide, and I was still nervous after travelling through Uganda – now relatively stable, unlike during my previous trip there when my looted Kampala hotel room had reverberated nightly to gunfire as truckloads of teenage soldiers careered through eerily deserted streets.

Zaïre too has had an uncomfortable history. The country was dominated in the thirteenth century by the Kongo empire, which extended over vast territories, each headed by chiefs responsible for collecting taxes in goods, cloth or slaves (primarily criminals and prisoners of war). But the Portuguese, who arrived in 1482, began sending out their own raiding parties – in the sixteenth century alone they shipped out 60,000 slaves – and by the eighteenth century the Kongo empire had been replaced by the Luba and Landa kingdoms to the south, with fine towns full of palm trees and decorated houses. In the mid nineteenth century, slave-trading Arabs from Zanzibar invaded eastern Zaïre, bringing with them all
the luxuries of European life: beds, furniture, candles, silver, glass goblets, silk and satin. 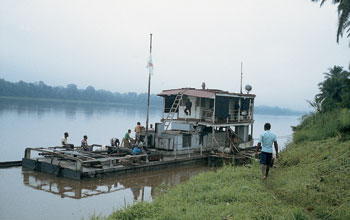 Passenger boat on the Congo River, Zaïredown the Congo in 1874 when, despite losing half his men through smallpox, starvation, crocodiles and battles with local tribes, he proved there were over 1,700 kilometres of navigable waters below the lower Congo’s rapids. However, Belgium’s King Leopold didn’t delay, and in 1884 the Berlin Conference awarded him the Congo Free State, in reality merely a franchise for the exploitation of land and mineral rights. This demanded tremendous quantities of labour, which resulted in even more barbarous slavery. Tribesmen who didn’t fulfil rubber quotas were maimed, and baskets of their smoke-cured hands were presented for inspection
to their bosses, inspiring Kurtz, Conrad’s central figure in his novel Heart of Darkness, to exclaim ‘The horror! The horror!’ . . .