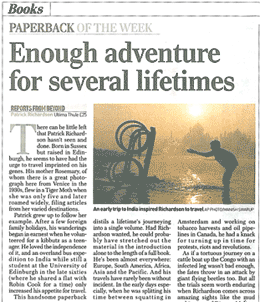 There can be little left that Patrick Richardson hasn’t seen and done. Born in Sussex but raised in Edinburgh, he seems to have had the urge to travel imprinted on his genes. His mother Rosemary, of whom there is a great photograph here from Venice in the 1930s, flew in a Tiger Moth when she was only five and later roamed widely, filing articles from her varied destinations.

Patrick grew up to follow her example. After a few foreign family holidays, his wanderings began in earnest when he volunteered for a kibbutz as a teenager. He loved the independence of it, and an overland bus expedition to India while still a student at the University of Edinburgh in the late sixties (where he shared a flat with Robin Cook for a time) only increased his appetite for travel.

This handsome paperback distils a lifetime’s journeying into a single volume. Had Richardson wanted, he could probably have stretched out the material in the introduction alone to the length of a full book. He’s been almost everywhere: Europe, South America, Africa Asia and the Pacific. And his travels have rarely been without incident. In the early days especially, when he was splitting his time between squatting in Amsterdam and working on tobacco harvests and oil pipelines in Canada, he had a knack for turning up in time for protests, riots and revolutions.

As if a tortuous journey on a cattle boat up the Congo with an infected leg wasn’t bad enough, the fates throw in an attack by giant flying beetles too. But all the trials seem worth enduring when Richardson comes across amazing sights like the mud architecture of Djenne, Mali, or crosses the vast Arabian sand to find Shibam, ‘the Manhattan of the Desert’, in eastern Yemen.

Along the way he’s taken hordes of photographs, showing a talent for composition and an eye for the uniqueness and the beauty of the regions he’s travelled through. If I have one complaint about Reports From Beyond, it’s that the photographs could have been given much more space. Constrained on the page, many of them look good enough to be blown up to poster size and framed.