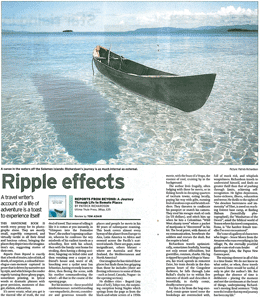 A travel writer’s account of a life of adventure is a toast to experience itself.

This handsome book is worth every penny for its photographs alone. They are mostly small, superbly composed, and virtually tactile in all their detail and luscious colour, bringing the places they depict into the imaginations’s eye, suggesting stories of their own.

Reports From Beyond is exactly that; a book of stories, tales of risk, of death, of surprises, a colourful travelogue-cum-memoir captured in prose that is driven by narrative not by style, and which keeps the reader eagerly turning those glossy pages, sometimes printing, in lyrical words or dramatic phrases with great precision, moments of danger, elation, exhaustion.

It’s never ersatz; what you get is the visceral vibe of truth, the real deal of travel. That sense of telling it like it is comes at you instantly, in ‘Glimpses into the Formative Years’, the author’s opening catharsis, wherein he confesses the wry misdeeds of his earliest travels as a schoolboy, first with his school, then with the family: sent home for stealing, then having a diving accident, bingeing on lethal cider and then vomiting over a carpet in a friend’s house and, worst of all, knocking over a cyclist near San Sebastian, having recently learnt to drive, then fleeing the scene, with his mother commandeering the wheel — all that in the course of the opening page.

But his instincts — these youthful misdemeanours notwithstanding — are empathetic, decent, considerate and generous towards the places and people he meets in his 40 years of subsequent roaming. This book covers almost every byway of the planet from Europe to Asia, Latin America to Africa and onward across the Pacific’s scattered island. There are gaps, some insignificant, others blatant — where are Australia and New Zealand, the Mediterranean and North America?

One imagines he has visited these places but finds them less gripping than those he includes (there are fleeting references to some of them — such as Israel, Canada, Prague — in the opening section).

He disliked cities — Bogota (‘my idea of hell’), Tokyo too, the surprising exception being Naples which springs from the page as from the black-and-white screen of a 1950s movie, with the buzz of a Vespa, the essence of cool, cruising by in the background.

The author lives frugally, often lodging with those he meets, or in flaking hotels in decaying quarters of taciturn towns, eating locally, paying his way with gifts, running foul of zealous cops and brutish soldiers. They threaten to confiscate his passport or snatch his camera. They steal his meagre stash of cash (in US dollars), and stitch him up when he hits a Colombian ‘Wild West shanty town’ where a packet of marijuana is ‘discovered’ in his kit. The local priest, with threats of ex-communication, browbeats the soldiers and rescues the dosh. But the respite is brief.

Richardson travels optimistically, sometimes fearfully, braving not only errant officialdom, but guerrillas, conmen, sharks. His leg is ripped by a pack of dogs in Vanuatu, his truck upends in remotest Zaire, his train derails in the dangerous heart of the Congolese darkness, he falls through Lake Baikal’s slushy ice to within five minutes of death and describes it beautifully, in darkly comic, deadly earnest prose.

For this is far from the bog-standard, comic-genre travel tome the bookshops are overstocked with, full of mock risk, and whiplash waspishness. Richardson travels to understand himself, and finds no greater thrill than that of pushing through limits, achieving self-recognition. He fights depression, home-sickness, illness, exhaustion and terror. He thrills to the sights of ‘the desolate barrenness and immensity’ of Tibet, is awed on reaching Everest base camp, at finding Shibam (beautifully photographed), the ‘Manhattan of the Desert’, amid the biblical world of Yemen where his travel companion, Fiona, is ‘the hardiest female traveller I’ve ever encountered’.

She’s one of a gallery of characters who linger — Senor Morez from the Amazon who runs everything in his village; Pa, the eternally youthful guide-cum-stud-cum healer of Rarotonga; John, the Papua New Guinea poet.

The missing element in all of this is a time frame. We do not know in what order, or when, these travels occurred. Dates would be useful, if only to plot the author’s life. But perhaps the absence of time is deliberate — placing the moment and not the continuum at the heart of things, underpinning Richardson’s moving final sentence: ‘Only now do I realise that my real journey has been my life.’