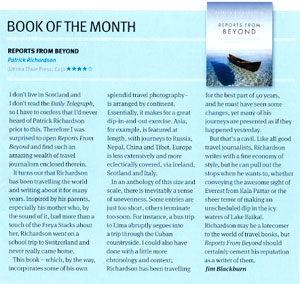 I don’t live in Scotland and I don’t read the Daily Telegraph, so I have to confess that I’d never heard of Patrick Richardson prior to this. Therefore I was surprised to open Reports From Beyond and find such an amazing wealth of travel journalism enclosed therein.

It turns out that Richardson has been travelling the world and writing about it for many years. Inspired by his parents, especially his mother who, by the sound of it, had more than a touch of the Freya Starks about her, Richardson went on a school trip to Switzerland and never really came home.

This book — which, by the way, incorporates some of his splendid travel photography — is arranged by continent. Essentially, it makes for a great dip-in-and-out exercise. Asia, for example is featured at length, with journeys to Russia, Nepal, China and Tibet. Europe is less extensively and more eclectically covered, via Iceland, Scotland and Italy.

In an anthology of this size and scale, there is inevitably a sense of unevenness. Some entries are too short, others terminate too soon. For instance, a bus trip to Lima abruptly segues into a trip through the Cuban countryside. I could also have done with a little more chronology and context; Richardson has been travelling for the best part of 40 years, and he must have seen some changes, yet many of his journeys are presented as if they happened yesterday.

But that’s a cavil. Like all good travel journalists, Richardson writes with a fine economy of style, but he can pull out the stops when he wants to, whether conveying the awesome sight of Everest from Kala Patthar or the sheer terror of making an unscheduled dip in the icy waters of Lake Baikal.

Richardson may be a latecomer to the world of travel books, but Reports From Beyond should certainly cement his reputation as a writer of them.